A couple of days ago I received notification that a new series of geocaches had just been published in North Bushey. This is one of the advantages of being a Premium member on geocaching.com as you have the facility to set up all sorts of notification rules. I have created a rule to email me whenever a new cache is published within 10 miles of where I live. This new series consist of 21 traditional caches all themed with nature in mind. Hidden in the 21 caches are clues to locate a bonus cache as well. This sounded just the ticket and we made plans to tackle the first chunk on Saturday morning as the weather looked a bit cooler and manageable. The series is called Brian’s Nature Ramble and having recently tackled another series set by this same owner I suspected we were in line for some cunning hides and challenges along the way.

This was to be our first outing with 2GPS devices as Sharlene has now downloaded an app called CGeo onto her Samsung Galaxy Ace Android phone and we were keen to see how it compared to the iPhone. Having the two devices gave us much more flexibility in terms of reading the descriptions and hints for caches in addition to having two separate devices trying to point us to the hides.

After parking up close to the first cache we headed off in search of our first find. I was glad to be quickly taken of the road and through a small gap in the hedges and onto a trail. Bothe GPS devices led us to the first GZ and we quickly started searching for the cache. The name of the first one was Fagus Sylvatica and if you Latin is any good you will know that this refers to the common Beech tree.

Only problem was that the GPS devices had led us to a spot with only hawthorn bushes and no trees. After a little searching however we discovered a suspicious looking log buried deep inside the base of one of the bushes. Pulling it out we discovered that it was in fact the outer container of the cache and as the photo here shows it is truly a cunning hide. This is definitely the most brilliant and thought out hide we have come across so far. Number 1 in the series found, and we were all suitably impressed, enough so to award this cache one of my favourite points. For every 10 geocaches you find you can award 1 favourite point. Having found just over 50 now and only, so far, awarded 2 favourite points I have a couple to spare and this was most certainly worthy of one of them.

We decided to head back to the car and drive forward a bit, having studied the map at home and worked out that parking somewhere around number 3 would provide a suitable and not to long walk back after completing 8 of the caches, as this is what we reckoned we had time for today. As we progressed through the series with 2,3 and 4 we successfully and quickly found them all and again we were pleasantly surprised at the work and thought that had gone into placing and designing these hides. Translating the Latin names for the caches revealed suitable themed hides for the garden snail, the European robin and bamboo. All three were brilliant containers and hidden so close to a relatively busy road with both cars and foot traffic that the owner deserves kudos for the boldness of these hides. One was magnetic, one was a hollowed out robin with an outer bark camouflage and one was a bamboo tube hanging from the branch of a tree. Only 4 caches in and already we are thoroughly enjoying ourselves although Sharlene is feeling a little nervous about one of the later caches which when translating the name revealed it to be none other than her mortal enemy, the Tarantula! My only complaint so far is that the caches being on the road to this point meant that there was quite a lot of noise and I much prefer the quieter locations but looking ahead we could see that after the next cache we would be heading away from the traffic noise.

Number 5 took us a little longer to find and demonstrated the importance of one of the good caching practices. If you don’t spot a cache immediately you arrive near GZ, it is often a good idea to step back into clear air and just let the satellites settle and fix the position of the hide as close as it can. Continually shifting around under and in and out of tree coverage can leave you bouncing from one potential hide to the next and getting frustrated. Both Sharlene and I came to this conclusion after a minute or two of not finding it and stepping back we waited for the Samsung and the IPhone to settle. Hers worked quicker and she sloped off quietly to my left and just as I was setting off I heard the shout indicating that she had found it. Up to this point Sam had found most of the caches and Sharlene was chuffed to get on the board here, especially as on discovering the cache it was camouflaged with a spruce of what appeared to be New Zealand Flax on the top of it. Sam called break time and we stepped onto the mown field and sat for a few minutes under the cloudy but warm sky and drank a little water and munched some haribo, always good for keeping the sugar levels up when burning a lot of energy. 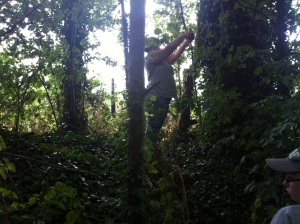 The Next three caches took us along Finch Lane, which was ironic as we had been in this very lane less than two weeks ago on our cache and dash outing to Bushey to find a container hidden in a fence post. The first of the three today warned us in the description not to climb the tree despite how inviting it looked. On arriving at GZ we spent a good 5 minutes or so at the wrong tree and as per the instructions stood trying to see the cache which was reported to be about 8 foot up a tree even though we would not have to climb. We saw a likely looking branch that was wedged but not attached to the tree and I spent a few minutes reaching up to retrieve it only to find that it was just a branch. Knowing how cunning his hides had been up to this point it does have to be said that we did spend quite a long time staring at this branch trying to work out if it opened. Lol.

Back into good GPS coverage area and patience revealed that the tree we needed was in fact on the other side of the path and Sharlene found that there was a string which allowed you to pull the cache down to you so indeed we did not need to climb the tree. We discovered a Harry Potter Key Ring trackable in this cache and pinched it out with a view to moving it and the other 3 trackables I am sitting on to Norfolk when we go later this week.

Onward to number 7 and at this one we all split up and spent about 20 minutes ferreting around in the bushes trying to find what was described as a large click box, which is about ice cream tub sized. At one point I fought my way back out of the undergrowth further down the path , muttering to myself right in front of a couple of guys who were walking along the path and there was a very awkward moment when I could only imagine what they were thinking. “what the hell is a blind man with a white stick, doing in the bushes” I try not to think about it, otherwise it just makes me laugh too much.

Rumblings were starting amongst us about having to file a DNF on this one but none of us really wanted to give up on it. Over and over Sharlene and I returned to clear sky and let our GPS devices take a fresh reading and every time they seemed to take us in different directions. Finally Sharlene found it and Sam retrieved the , indeed, large click box, probably the largest cache we have found so far. Stuck to the bottom of this one inside was, as the name of the cache had promised. A friendly crab. No swag in side other than the log so we dropped in a little Terry Pratchett Death pin badge just to start things rolling. This is a nice sized cache and I imagine it will be a regular site for storing large trackables and swaps in the coming months and years.

Number 8 took us to the end of Finch Lane and at GZ we found the cache quite quickly attached to a fake lost dog poster that the cache owner had cheekily affixed to a post. I had to laugh at the boldness of it. On reading the poster it turns out that his contact details of phone number and email address were actually coordinates and the email address was at geocaching.com. I expect some people might take an interest in the slight oddness of this poster and go home and look up geocaching.com.

With non caching plans for the afternoon and our tummies starting to rumble alas we had to curtail our geocaching there which was a shame as the weather was a perfect cloud but warm variation that meant none of us were wilting or shivering and I would have loved to carry on with the series but it was not to be.

So far the series is proving incredibly clever and entertaining and we can’t wait to carry on with it. As far as the Samsung goes it has to be said that it is pretty accurate at pinpointing the locations. At times I suspect it is a little more accurate than the iPhone. The only problem we did find that using the GPS on the phone ate through the battery like Augustus Gloop in Willy Wonka’s Chocolate factory! Sharlene got her first low battery warning after only about an hour and had to resort to energy saving techniques like turning the brightness right down and turning off Wi-Fi etc. just to keep it going. This is not so much of a problem if out for a long day of caching as you can easily pick up additional batteries for the Samsung and have one or more in your bag. You can’t do this with the iPhone as it is a sealed unit and the battery is not swappable although there are ways around this with external batteries if you need to cache for long periods of time. As it is the iPhone was only down to 50% at the end of our 3 hour stint and that was without employing battery saving techniques so it holds up well.

Check back soon for, hopefully, the next part when we take on the second leg of Brian’s Nature Ramble.