Well, day 3 of the geocaching.com 31 days of August challenge and so far so good. Yesterday we managed to find one of my previous DNF’s in North Watford, Bella’s Bounty No. 5 Near home (GC3N585) although we almost gave up on it again before Shar finally spotted it. Two days down and two souvenirs received. For day 3 we had plans to try and finish a series we started before we went to Norfolk – Brian’s Nature Ramble in Bushey. The series consists of 21 caches and a bonus and last time we managed to find 8 of them so that left us with a rather daunting total of 13 left as well as the bonus. This would be a new PB, our previous having just been set at 11 when we were in Norfolk.

The weather looked ok, that is to say it was not scorching hot and although a few showers were forecast for the afternoon we thought we would risk it. Packing the usual supplies in to the back pack we set off and parked the car near Finch Lane in Bushey where we had to stop last time. As we walked from the car towards the footpath that would be the start of our route the sun was warm in the sky and our spirits were high. I had my list of the cache names translated from the Latin on my iPhone as well as all the caches loaded into Ariadne and Shar had her Samsung up and running with all the remaining caches pre-loaded.

Our adventures took us up a nice footpath with fields on both sides to start and the first couple of caches were found nice and quick, Shar finding one and Sam the other. The route to number three was interesting, passing through a kissing gate and into a field that once used to be home to a pond but now was occupied by a number of cows. The going was a bit muddy here not to mention littered with cow pats in places and thankfully we located the cache without too much trouble and only one muddy foot for Sam. From here the route led us along the path and across a road and down a narrow bush lined path that intersected two halves of a Jewish cemetery. Quite bizarre really but I guess that the footpath existed long before the Cemetery did and the land owners were required to maintain the path.

After the next cache we descended some steps into a valley and was about to head up the other side when the heavens opened and we had to shelter under some nearby trees for around 15 minutes until the rain had eased up. Slightly damp we carried on and found ourselves emerging onto the busy A41 Close to the China Palace restaurant a fact that had already announced itself to my nose a few minutes before. The next two caches were not too hard to find, one causing us to dart into a bush at the side of the road where Shar found it hidden in a stick that both Sam and I had already picked up and not realised it for what it was. The second of the two was down to me to retrieve the cache, firstly because it was up high and secondly as it was hidden in a large fake spider which Sharlene refused to go near. I must say it was slightly unnerving standing there holding this big spider whilst the log was signed. Lol

Onwards we went and after turning down Aldernham road we crossed into a relatively new development of houses and were glad to get away from the noise of the busy road. We found ourselves in a very nice estate of houses with a small playground and a delightful meadow bordering onto it at the rear. I had no idea it existed but then that isn’t saying much, I have spent the last two months whilst geocaching finding places that I didn’t know existed even though we have lived around the area for almost 9 years. Another two caches quickly found one on a rather perilous steep slope which Sam retrieved whilst mum held her breath.

A short walk along a road and then back onto footpaths and a long walk with a rather grotty looking stream / sewer / rubbish tip (at times) on one side and the back fences of people’s houses on the other. The last three caches in the series were all placed along this path and just as we found the last one, Shar retrieving it much to the annoyance of Sam who had been looking forward to this particular hide as it had the right mix of danger and heroism involving possibly falling in a river, the rain came again.

Having found all the caches we took the opportunity to shelter under some trees and put the numbers together for the bonus cache. I loaded the coordinates into the iPhone and after the rain stopped we followed the instructions for getting across the nearby golf course to complete the walk. Due to a bit of a cock up on my part we ended up not going for the bonus but we will save it for next time.

A new personal best, an excellent day and a thoroughly enjoyable series of caches. The owner has really put a lot of thought and effort into creating these hides and placing them and it was a genuine delight to find each one. 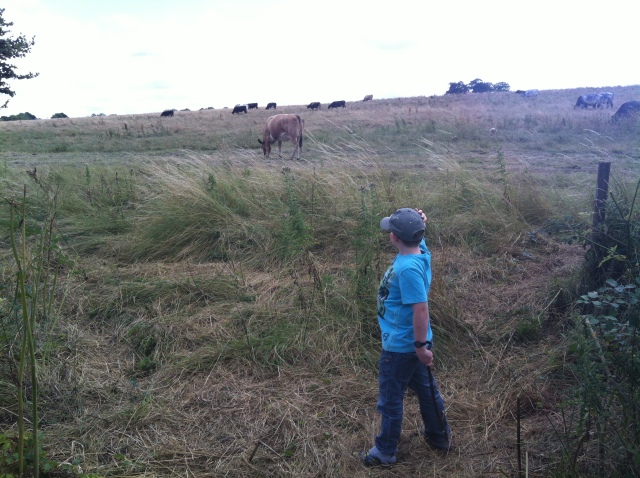