Getting Engaged – The High Point of the Year

Monday 19th August 2013.
As Sam was up visiting Nanni in Norfolk this week, Shar and I had planned to have some days out to make the most of the time we had alone. At the beginning of the year we had had discussions about getting married and whether we ever would. Previously we had both agreed that initially neither of us needed the wedding ring to demonstrate our commitment to each other. Whilst we agreed that this was still true, after all, having a child and living together for over 12 years shows a great commitment to each other as it is. We had talked many times about a wedding and both had fanciful ideas of venues and how the days would go but knew we could never afford what we wanted. Now we decided that to hell with all that, we wanted to be man and wife and the wedding day plans would just have to be scaled down to our budget, which is pretty much nothing… lol. I wanted to maintain some essence of romance and mystery so I told Sharlene that I would probably propose to her this year but that she would have to forget about it for now as I wanted it to come as something of a surprise when it happened.

At the beginning of the summer plans were in place for Sam’s trip to stay with Nanni and I thought that this week would make the perfect time to propose. I started to think of how and where to do it and whilst looking at geocaches on a map I noticed something that caught my eye. There is a cache not far from the highest point in Hertfordshire and this got me to thinking, how about proposing at the highest point within the county we live. I did some research and it seemed that the highest point was in some woods not far from tring. So that was my plan.
With ring in pocket and plans to go for a nice walk in Tring and then a pub lunch we set off. Having not been to this area before or able to scout it out with the likes of google earth or street I wasn’t quite sure what to expect when we got there. We parked the car and started our walk through the woods… nice enough. I was hoping for panoramic views of Hertfordshire but it didn’t look like that was going to be on the cards as the landscape was pretty much well hidden by the dense woodland. We walked nonetheless and I started to wonder whether the ring would stay in my pocket for another day. However after a while we veered off to the left and headed for a break in the trees. I checked my iPhone and saw that the altitude was pretty much within a metre or so of the recorded height for the highest point which was 248 metres.

Just as we broke out of the trees into the open I felt the time was right and dropped to my knee and popped the question. Sharlene was genuinely surprised and my comparison to bringing her to the high point in Hertfordshire as she was the high point in my life went down well and she agreed to be my wife as I slipped the ring on her finger.
We still don’t know when the wedding will be or what form it will take but I know that one day Sharlene will be Mrs Weston. 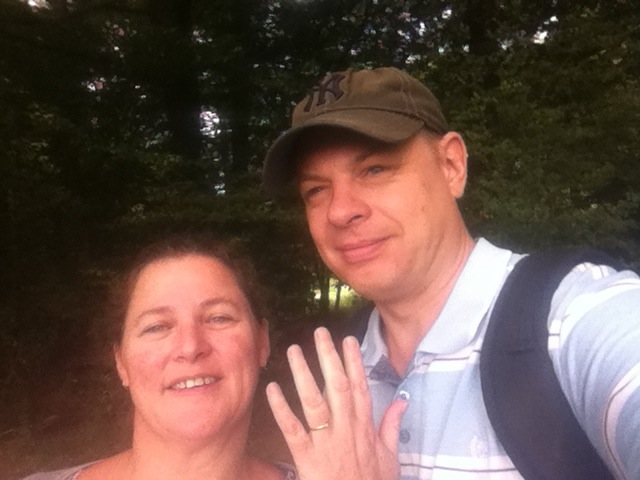 For the record the coordinates of the place where I proposed are Latitude 51.77005 degress Longitude -0.68391 and you can see the location on this Google Map of Pavis Wood.

1 Response to Getting Engaged – The High Point of the Year