Hatfield for our 700th

On Wednesday Shar and I had to take a trip to Hatfield train station to drop off my niece Laura who, after staying with us for a week, was heading to Norfolk to spend a week with her nanny. We needed to be at the station at around 10:30 and seeing as we had nothing lined up for the rest of the day, I planned us a couple of diversions on the way home to, you guessed it, do a little geocaching. The weather is starting to get quite hot over here and so I was careful not to suggest any long walks through open fields. My plan was to make three stops on the way back home, each time picking up a few caches, that way never being too far from the haven of the air conditioned car.

Our first stop was a little way south of Hatfield not far from North mimms. My chosen parking spot was at the edge of an industrial estate and it was just a few metres from the first cache, Ginger Bread Teddy @ Work (GC4DQHB). Next to the car there was a small patch of trees that separated the industrial estate from some houses and our guess was that it was in there. We tried about half a dozen likely looking hides before finally Shar found the container nestling in an ivy covered tree. After signing the log we replaced the cache and headed off on foot towards our second cache, Great North Way (GC2J62P).

The walk took us along a cycle path next to the industrial estate and because of the position of the sun it was blissfully in the shade at this time. Apart from the occasional cyclist – how dare they cycle on a cycle path – we saw hardly anyone at all as we strolled along in the direction the phones were pointing us. The cache page was very descriptive about the position of the hide, giving instructions to take 10 paces north to find a fir tree behind the metal fence and search on the bottom rung of that. You would think that with guidance like that, it would be just a few seconds until we found the cache. After locating the main fence posts and searching those first I then had to resort to slowly checking under the lower metal rung heading further and further away from the fir tree. For some reason I focussed on heading south along the fence and after 10 minutes still had no cache in hand. Stopping once to allow a muggle to pass and then a minute later failing entirely to stop as another bemused muggle walked by, I eventually decided to head north from the fir tree and found the pesky thing about a metre from the tree. For a cache page with so much assistance it was a complete farce that it took me so long to find it, but find it I did… eventually.

This smiley would take us up to 699 and as we located the footpath to take us to the next cache, we were aware that it was to be our 700 milestone, whatever it may be. I have planned some of our milestone caches so far and others I have just let roll by. I can’t be arsed organising a whole trip or rejigging things just to make sure we get a certain cache for a milestone at least not at 700 anyway. Maybe at 1000 the story will be a bit different. Having said that I was interested to see what fate had in store for the auspicious occasion.

First things first though, we had to make our way to GZ. The footpath was wonderfully tree-lined that meant the whole walk was in the shade although it was a little difficult under foot at times with so many roots encroaching onto the path. We came across some horses after a short walk and stopped to say hello and take a picture before continuing on. A short way down the path we could hear a swarm of flies buzzing away in the bushes and in hindsight it was probably one of these that bit me causing my upper arm to swell up rather alarmingly later in the evening.

Oi! Horse! Your fly bit me!

Blissfully unaware of my impending swellage we carried on down the path and in another 500 metres we found ourselves at the GZ of Jock Nash’s truanting days (GC4HR11). According to the cache page the container had been hidden as a memorial to a dear grandfather who had passed away last year and who had, in his youth, played truant from school in and around these fields. After around 5 minutes searching Shar spotted something and directed me to a well concealed hollow in a nearby tree from which I extracted a wonderfully constructed fake log cache. The log was around a foot long and the top swivelled off to reveal a recess big enough for an official Groundspeak micro container lovingly sealed in a plastic bag. The log was bone dry and as I posed for a picture with our 700 find I pondered on the care that had been taken to procure and hide this lovely tribute to an obviously much loved relative. Fate had been nice to us, this was a great cache to log as our 700th and I was happy to give it a favourite point, as much for the well-constructed container as for the sentiment that it demonstrated. 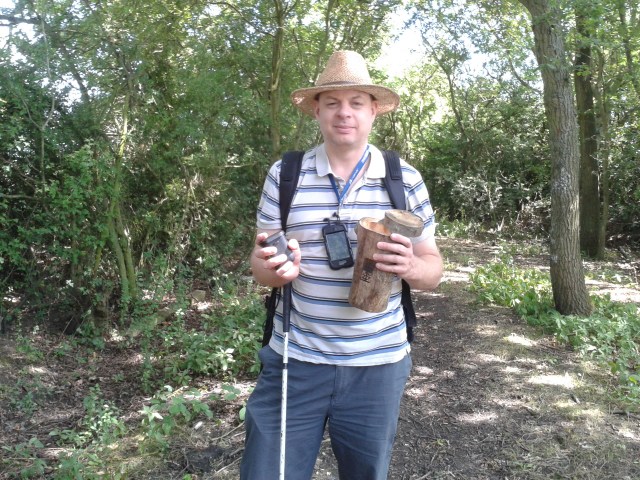 Unsure if there was an alternative route back to the car we opted simply to retrace our steps the 1.5km back to the sanctity of the air conditioning. It was heading towards lunchtime but we decided to drive on to our next stopping point and see if the surroundings were a little more conducive to a picnic than the industrial estate… not that we haven’t eaten lunch in this sort of place before whilst out geocaching.

The next parking point was in London Colney, a few miles down the road and with a name like riverside, it conjured up images of pleasant environs for a well needed energy boost. We weren’t disappointed – the parking was in a lovely, quiet tree-lined area, next to the river. We parked in the shade and opted to eat in the car where it was cool and we could listen to the radio.

There were four planned caches at this stop, all pretty much following the river as it headed towards the concrete snake that is the M25. I seem to be blogging a lot lately about the motorway… we just happen to be caching near it quite regularly. The first cache took us a short distance in the opposite direction from the others along the river but it was a very pleasant diversion. The walk along the river bank was in the shade of trees with the water burbling along to one side and ducks quacking away around us. As we approached GZ we passed under a road bridge and almost immediately after the phones told us it was time to start searching. There was no hint and it was only then that we realised that the last three people had not managed to find it. With a sigh we got down to it. I focused on the railings on the side of the river and started feeling for a magnet micro stuck somewhere on that. Shar spotted a footpath sign half hidden in the trees and I fought my way in there and stroked some spider webs for a few minutes but no cache. Our hopes started to fade as we drew blank after blank and Shar headed under the bridge whilst I kicked around in the bushes not really sure what I was looking for. I did find some old fence posts that were being absorbed by nature and tried at the bottom of these but no luck. I came across a tree in between the posts and half-heartedly crouched down and fumbled around at the base. As I was about to stand up again my brain started screaming at my consciousness that my hand had just touched something unusual. I focus back on what I had touched and realised it was a slither of plastic… on the bottom of a small rock…hang on… this is it! I picked up the fake rock cache and not quite believing I had found it, called out to Shar to come join me. It was only then when she emerged from under the bridge that she noticed the tree I was searching… “oh… it’s a willow tree,” she said and then it clicked in my head – the name of the cache was ‘Wind in the Willows (GC4MG7T)’. 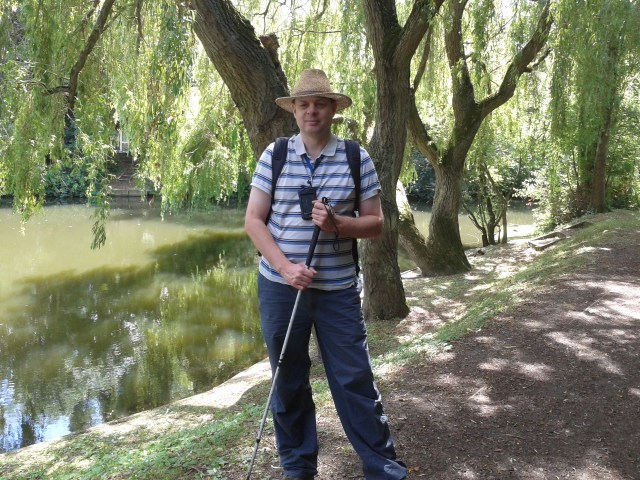 Caching next to the Colne

As we walked back in the direction of the car which was on the way to the next cache we allowed ourselves a short period of smugness at finding the cache after 3 DNFS. This feeling didn’t last long though as very soon the focus switched to the next geocache and the glory of the last one was forgotten. The next one, Colne Ramble (GC4NEJY), took us along the river and through a small piece of parkland in front of a very inviting pub. When faced with a bridge and an arrow that wasn’t being definitive about which side we needed to be on I made an executive decision and decided to stay on the side we were and so on we walked. 5 minutes later we retraced our steps to the bridge and crossed over to the other side!

Although some of the walk to the next GZ was under the cover of trees the general air temperature was starting to rise now and with the walking we were doing, Shar was starting to find the heat to be a bit oppressive. She was glad to break off the path and head into the trees when we reached GZ and it wasn’t long before she had spotted the ice cream container that was the cache and we were soon signing the log.

Looking at the next one, Colney Conundrum (GC3HHZ5), which was the final of a puzzle that I had solved the day before with a very helpful nudge from fellow cacher WizzardPrang – thanks Steve:) – we saw that it was only 220 metres away and Shar said that she reckoned that would be ok but after that she would like to call it a day. we made the short walk further along the path towards the GZ. With the help of the hint we made the find quick and easy in a stump right at the side of the path and after signing the log we turned tail and headed for the car.

We left one cache out on the second leg but I reckon because of its location we should be able to return there relatively easy and park at a different place to make the walk to GZ shorter than the one we had done. The third diversion would have to wait for another day too, which seems to be par for the course with the caches I had planned. Last year we did a series called the Shenley Loop and had found all the caches except for two, which turned out to be missing anyway. The containers were replaced by the CO promptly an I have had them on watch for the last 6 months or so and they have both been found many times. On a number of occasions I have planned to go and wipe these DNFs from our tally but it never seems to work out for one reason or another and it looks like they will stay as DNFs for a little longer… but we will get them eventually… we will get all you pretty little caches eventually. Muwahahahahahahaha > :}

4 Responses to Hatfield for our 700th