Posted on February 7, 2015 by washknight

We mark Sam’s 400 cache find milestone by heading to the woods in Uxbridge to tackle our first whereigo cache, and we find some 10 year old swag.

One of my geocaching resolutions this year was to pay attention to our numbers and make sure that we do something special for our milestones. Despite this resolution, as you may have read in my blog recently, we still managed to let our 900 milestone slip by without noticing (seeBack to Back to Welwyn with Ellie to get the plague) . Realising that his 400 was fast approaching, Sam came to me and said he definitely wanted to do something different for it. We put our heads together and eventually he decided that he wanted to do a whereigo cache, we had never done one before. So what, I hear you ask, is a whereigo?

A whereigo is a location based game that you play using a GPS or smartphone. You need a special app for your smartphone or a compatible GPS receiver and you have to load a cartridge into this for each game. The cartridge is not a physical

thing, but instead something you download from the whereigo.com website. When you play, you move around in the real world, and as you arrive at certain places, the app triggers tasks for you to do. In its simplest form you may be instructed to head in a certain direction for a certain distance and when you reach this place the app will then ask you to find a piece of information and enter it so that you can move to the next task. It is basically like an electronic multi cache. Eventually you will go to all the required locations and complete all the necessary tasks and you will be given a completion code. Whereigo games exist in their own right outside of geocaching, there are cartridges that are not also geocaches. But a lot of the cartridges are both a whereigo game and a geocache, so that when you complete the cartridge, you will be in the vicinity of GZ and be able to find a physical container there. There are complex cartridges that are more like complete roleplaying games involving items you need to collect, characters you need to interact with or fight and places you have to travel to and tasks to solve, all while actually moving around in the real world. For our first attempt at a whereigo I thought it best to seek out a simple one and so we found ourselves in the woods in Uxbridge, West London. preparing to play the 007.5 Licence to Cache (GC55D4Q) whereigo cartridge.

Before leaving home we had all downloaded free whereigo apps for our phones. Sam and I have iPhones and Shar has a Samsung s3 mini. Once we had done that we had to figure out how to use the app, signing into the whereigo online system using our geocaching.com credentials and downloading the cartridge for the adventure. The instructions on the cache page simply told us to start at the published coordinates where we could park and our mission would begin.

After loading our apps and telling them to start the cartridge we found that we were just a few metres from the start point. When we moved closer, we entered a zone and all our phones sprang to life telling us what we need to do now. We had to find a date from a notice board and enter it into the app. We all got a successful response and then we were instructed to move to our next location. There is a small compass arrow and a distance reading for you to follow and we could see that the next stage was only about 30 metres away. As we got to within a couple of metres the app asked us to gather another bit of information so that we could access the direction to get to the next location. In total I think the cartridge had 5 stages and when we finally arrived at the last one which was some 700 metres away from where we started, the app told us where to look to find the cache. We found the whole experience very entertaining and Sam especially was eagerly running ahead to each zone and had found the cache whilst Shar and I were still about 30 metres away. It was an excellent way to mark Sam’s milestone and we definitely want to do some more whereigo caches in the future. 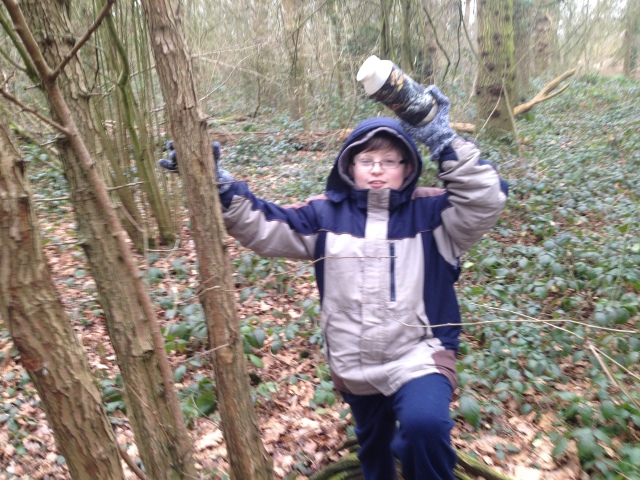 After we had found the whereigo cache we were just under 200 metres from another cache, Ten Acres Cache (GCNAMQ), and so we decided to go and find this one too. It was a bit of a muddy walk to GZ and when we got there I fell in a ditch. No harm done and once I had got myself out, Sam and Shar made a quick find of the cache inside a tall tree stump. The cache was placed back in 2005 and we were amazed to discover the original log book still in the cache. It was dry and in perfect condition and we took a minute to browse through some of the messages that people had left. We were tickled to see that bones1, a friend of ours, had been the FTF back in 2005 and according to his message in the log book he left a pair of gloves in the cache. As we looked through the contents of the container we found the gloves that he had placed in there almost 10 years ago. To make the discovery of the cache even cooler, as we were retrieving it, a robin was hopping about just a few metres away. 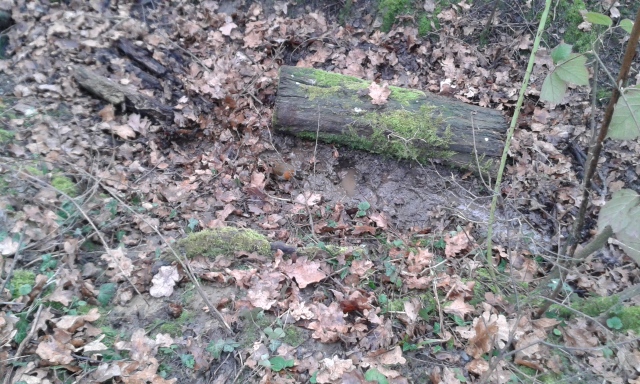 I want to say well done to Sam on reaching his 400 milestone, Shar and I are very proud of him. Happy days.

This geocaching adventure took place on Saturday 7th February 2015 and took our cache count to 948.