We stay local, find a truly special container, come close to breaking geocaching rule number 1 and find a favourite point that has been lost down the back of the sofa for the last 18 months.

At the beginning of the last week of February our cache count was at 966 and my thoughts, again, turned to what we might do for our 1000 milestone. I quickly realised that another problem was presenting itself, which was trying to work out exactly when it would happen and how to try and ensure that it didn’t occur on a boring micro, or even worse, a micro on the bottom of a rubbish bin (shudder). I knew we had a caching day planned with our friends Geoff and Melissa on the 28th which could potentially yield 28 smilies taking us to within 6 of the milestone. This meant that if we wanted to do something special for our 1000, Shar and I wouldn’t be able to find more than a couple of caches in the run up to our day out with Smokeypugs. Hmmm, not sure I like this restricting ourselves to the number of caches we can find thing. To avoid having to think about it too much more, I suggested that we do a multi during the week as this would provide us with a good opportunity to get out and spend a bit of time enjoying the fresh air but still get a happy face into the bargain. We agreed, and said that we would worry about the milestone thingy after the weekend when we knew how far from it we would be. It was starting to feel a bit like the 1000 milestone was dictating how and when we cache and part of me resented that, however I am still very aware of my promise to honour our milestones this year.

After dropping Sam at school we drove over to Greenwood Park in St. Albans which is only about a 15 minute journey. We had been there once before back in September 2013 to grab a clutch of trads that were placed all around the park. When writing this I was surprised to find that I hadn’t blogged about it but I think I was still quite new to the blogging world and not as onto it as I am now about reporting our caching adventures. Funny because I remember vividly one of the caches in particular, Julian’s Tangle (GC4FJ3Z), as it was inside a small copse of trees and you had to scramble up a very steep earth bank to reach the cache which was hidden in some tree roots. I remember all of us both managing to make the ascent but Shar gave up after a short search and ran squealing back down the slope. She stayed at the bottom and took photos. I also remember that I found the cache and getting down was far more tricky and I think was only achieved by Sam bum sliding and me edging down backwards very slowly even though I wanted nothing more than to let myself run down like Shar had. . I revisited my log for that cache and it made me smile. I noted that I had mentioned I was awarding it a favourite point but when I looked the cache doesn’t appear to have any favourite points at all. I can only think that I forgot to tick the box to add a favourite point and can only apologise to Hope2pigs, the cache owner, for allowing her to think that I was going to award an FP but never doing so. I have rectified the situation now and am surprised that the cache doesn’t have more FPs to be honest. 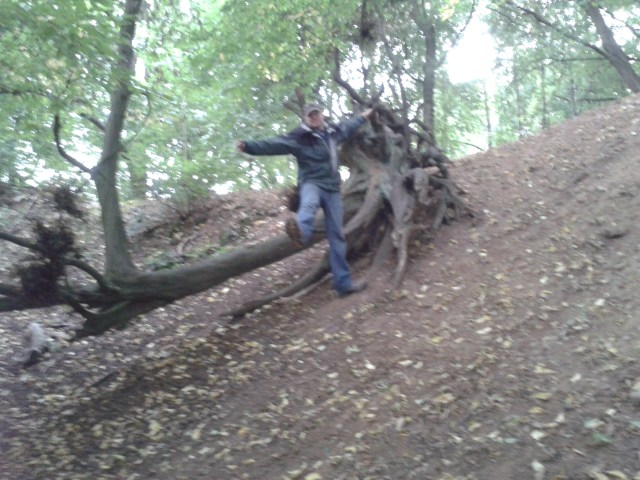 Anyway, I appear to have become side-tracked and am blithering like a senile aunt who can remember every single minute of the blitz in great detail, but nothing from the last 7 days. Perhaps a small sherry might focus me… hmmm perhaps not. So, Shar and I were at Greenwood park to do WHO’S HOME (GC57TZ2)and as we parked up we were surprised at how many other people were there too. It took us a short while to realise that the car park was also in use by parents dropping off kids at a nearby school. Thankfully it slowly emptied out and we booted up and set off in pursuit of our first waypoint. It was here at a sun dial that we realised that we didn’t have a pen. I know, I know, a geocacher without a pen. Shar is the writer of words so she normally brings one. I do normally have a couple of spares in the bag that I always carry but no matter how much Shar searched it she couldn’t find one anywhere. Our last hope was that there was one back in the car. We made a mental note of the information we needed for the cache and trotted back to the car park. No pen in the car either. I decided to take a last look in the bag, just to be absolutely sure. I found not one pen, but two. After a short period of shaking my head at Shar and smirking, we headed off towards the next waypoint.

The next set of numbers was found on an information board further in the park. Whilst we collected the required numbers we marvelled at how popular the park was with dog walkers. A friendly dog came sniffing around us and was closely followed by its owner assuring us that the muzzle was there not because he was aggressive but because he was an “eater”. She mistook our politeness for interest and proceeded to regale us of his recent escapades in consuming a rubber glove and how the vet had only just recently removed it from the poor dog’s innards. The mental images of what a rubber glove could do to the digestive system of a dog were not ones I wanted at 9.30 on a cold Tuesday morning, or any morning for that matter.

Our third waypoint was the site of a time capsule that had been buried to celebrate the new millennium and our fourth and last stop was a bench at the top edge of a field that was both sheltered from the wind and well positioned to enjoyed the wide open vista to the south east towards London. We sat on the bench while Shar calculated the coordinates for the final and then I found I simply didn’t want to move. I know, I’ve said it before and I know you must be thinking what can it possibly mean for a blind man with almost no useable vision to sit and admire the view but it simply is one of the most peaceful and enjoyable things I can think of. I get a sense of the vastness of a decent vista, of the enormity of the landscape stretching out before me. I don’t need to see the features to realise that they are there, that all these small details fit into a massive bigger picture. I’m not sure what I used to get out of admiring breath-taking views in the past, or even if I took the time to stop and enjoy them, but now they remind me of our insignificance in the world. How we are just tiny, miniscule invading specs that inhabit this planet and it will quite happily carry on being fantastic and enormous without us. We were brought back to reality by another passing visit from glove swallowing dog and its owner. Time to find a geocache. 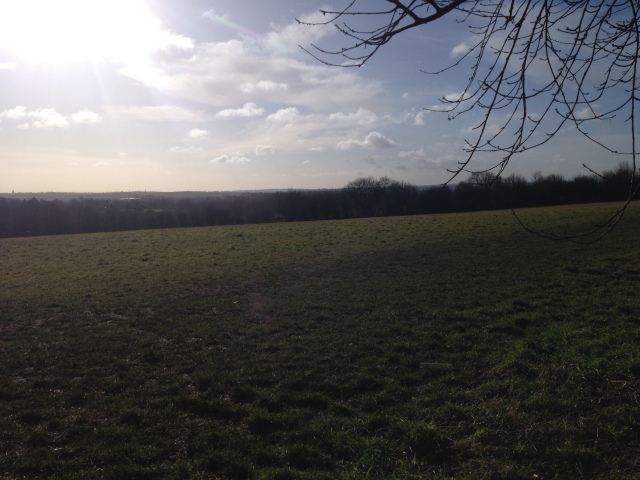 The coordinates led us to a small clump of trees in the middle of a grassy field and upon entering it, I was immediately struck at how clear the ground was. The trees were not those with large root clusters protruding from the ground and there were little if any fallen logs. Not really anywhere to hide a regular sized container. I pulled out my phone and set about feeding our numbers into the geocheck just to make sure we had the right place, but before I could finish, Shar had made the find. The cache wasn’t at ground level and blended into its environment beautifully. Upon opening it we found a cool custom made man constructed out of plastic about 8 inches tall holding a pencil in one hand and a thin tube in his other. The latter contained the log. The container also included a neat sliding drawer for people to leave swaps and trackables, it was a true piece of art, a most unexpected discovery that warranted the immediate allocation of favourite points.

I can thoroughly recommend this multi, it would be fantastic for kids particularly, the walk isn’t too long, takes you to some interesting places around the park and the container is guaranteed to elicit oohs and ahs. It was truly a case of quality over quantity for our caching adventure in Greenwood Park. Happy Days.

This geocaching adventure took place on Tuesday February 24th and took our cache count to 967.