When did I go to Norway?

Generally when we DNF a cache I add a watch on it to see how other people get on so that I can decide if it is worth a return visit at some point or not. I had become a bit remiss at doing this of late so I decided to go through all our DNF logs and make sure they were all on watch. I noticed two things as I was doing this. Firstly that with 1039 finds we only have 31 outstanding DNFs. That is to say that of all the caches we have logged DNFs on only 31 still remain active and unfound by us. Either we have returned and found them or they have since been archived due to being missing or other similar reasons. to me 1039 found and 31 DNF sounds like a pretty staggering ratio and one that I am pretty proud of. 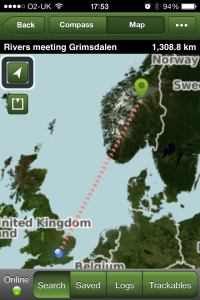 The other thing that I noticed was that I had apparently visited Norway in November last year and logged a DNF on Rivers meeting Grimsdalen (GC35ZZB). This surprised me because I have not logged any DNFs in Norway for the simple reason that I have never been to Norway. I can only assume that I incorrectly entered a GC code whilst doing my logging. I read my log which waffled on about not being able to tell the difference between different tree species and laughed at what the CO must have thought. All the other logs appear to be in Norwegian although a few are just TFTC and that seems to be the same whichever language you spell it in. I half hoped that it would be a really tough 5/5 cache or something but reading the translation of the description (included below) it seems to be a fairly normal cache that doesn’t get visited very often.

Just made me giggle was all. I thought about deleting the log and then I decided not to, just to see if the CO ever questioned it.

Between Dovre and Folldal is “Grimsdalen”, one of the longest seats valleys which at all times has been a gjennomfartsdal between Gudbrandsdalen and Østerdalen. People’s use of the area has left its mark on the valley. From Dovre followed ferda people paths and tracks through the valley to Folldal. Here were the work getting in the mines. Delivery of food, charcoal and timber laid the foundations for shipping routes through the valley. Grimsdalen has an interesting Quaternary with many landscape formations from the last ice age. Here meet rivers Haverdalsåi and Grimsa in a deep and exciting current. It has poured many a liter of water through this canyon over the years. Many interesting plants and birds can be found here. When we put out the cache, there sat a Dialed Rost on edge and sang their little mournful tones. Do not go too far out on the edge, since there is steeply into the river.

This geocaching adventure took place in an alternative dimension in November 2014, didn’t increase my total cache count and I didn’t enjoy Norway at all.

This entry was posted in Geocaching and tagged DNF, Geocaching, Norway. Bookmark the permalink.

5 Responses to When did I go to Norway?