This is the third and final quick catch-up article that will lay the OCD pixies to rest and allow me to move on and get back to caching blogging properly again.

On 27 October we joined forces with our friends Geoff and Melissa and pug dog Smokey to, once again, embark on a PugWash caching adventure. It was back to the Aylesbury Ring to tackle another section, this one going by the name of Mallard and comprising 20 caches.

It has to be said that the top legs of the Aylesbury ring are not set in the most inspiring of locations and that the linear walk was predominantly through farm fields with a couple of country lanes thrown in for good measure. I reckon if you do them on your own it would be pretty dull and uneventful. Thankfully we were not alone and the unsurprising cache locations, in the borders between fields, became incidental to the fine quality of the company in the form of our friends. Lots of good conversation and laughs made the caches pass by in the blink of an eye or two. 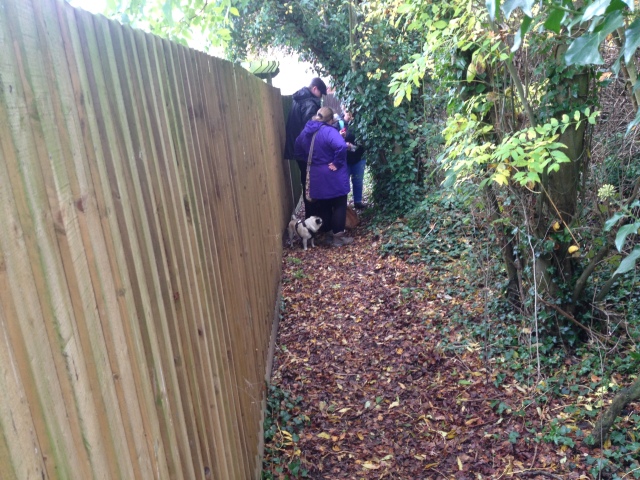 Not the best of starts – A cache that Geoff had already found previously eluded us for a full 10 minutes!

Worthy of a mention was not so much the caches but the challenging and sometimes bizarre pieces of footpath furniture that Buckinghamshire County Council had seen fit to provide as a means of traversing between the many fields we negotiated on our route. From the basic, but rickety, stile to the single plank across a ditch, there was something for everyone. There was the stile, plank, stile combination at one field boundary which took a certain amount of coordination and cooperation to get everyone across safely. Then there was the plank with a hand rail that was slightly easier to cross than the mere plank. Even the basic stiles were challenging in that some of them had become half embedded in the surrounding growth which required a certain amount of sticking your bum in a bramble bush in order to “get your leg over” as it were. With the occasional farmers gate and maybe even a kissing gate thrown in too, the whole walk resembled less of a caching trail and more of an episode of the Krypton Factor.

Plank Bridge – Tricky to cross blind and not to mention there was also a cache somewhere under it too.

I think the most difficult section for me personally was the large ploughed field that we had to cross. The path did go right through the middle of it but the recent ploughing made it quite difficult to stay on the narrow flat bit. I failed so utterly – bracing for a ridge only to find I was in a dip and expecting to walk through a low patch only to trip up on a ridge. An endless stilted procession of jarring and tripping incidents. I must have cut a very strange figure as I staggered like some sort of drunk thunderbird puppet through the field at a ridiculously snail-like pace. To add to the bizarreness of it all, half way through the field, my phone rang and I got to “do my bit” and act as a PAF for another friend who was trying to find a cache that we had recently logged.

The unusually mild weather of the previous week continued and after lunch the sun was out and beating down strong, causing most of the group to shed coats and jumpers for the remainder of the walk. Only a couple of the caches gave us any trouble and even those we managed to find in the end. One was almost buried in thick mud that had accumulated around a post and the other was…. well it was just there even though 15 minutes of us all searching didn’t manage to uncover it. It was only when Geoff got on the phone to another friend in hope of some advice, that my fingertips blindly brushed against it and I managed to pluck it painfully from its thorny hiding place.

By the time we got back to one of the cars, everyone was thoroughly knackered and more than ready for a piece of Melissa’s yummy cake, the thought of which had definitely kept me going for the last couple of caches. Despite the somewhat mundane scenery and predictable hides, the fact that it was a PugWash adventure meant that we all ended the day with smiles on our faces not to mention slightly sticky fingers. 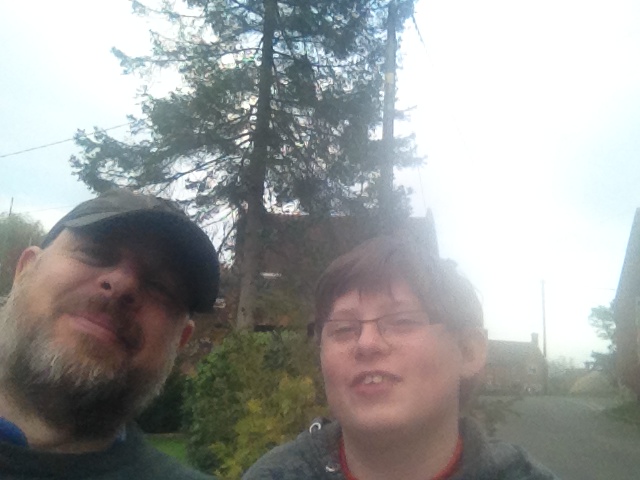 The good ship PugWash sailed on this adventure on October 27th, 2015 and the crew landed 20 finds taking our total to 1361.