Way back at the end of August last year, I posted an article about starting to work on the Scouts geocaching badge with Sam and some friends. An update on the situation is well overdue and whilst I said I wouldn’t be filling in the missing articles from my recent absence from blogging, this is an exception as I am so proud of Sam and his friends Ben and Ethan for the work they did towards this badge.

To recap, our first outing was to a local park, Cassiobury, where I taught the boys about the basics of geocaching, the science behind it and then got them to do a few simple map reading tasks and then ended the day by finding a couple of caches in the park. (See Scouting out and about in Cassiobury Park for more details).

The next step the boys needed to complete was to plan and embark on a walk of at least 5km using waypoints to navigate. As another task they would need to find a number of geocaches including a couple of multis so it seemed to make sense to combine the two into one outing. Just next door to Cassiobury Park is Whippendell woods and conveniently there is a series of caches there that ticked all the boxes. After a brief planning session our two families met up one Sunday morning at the woods and led by the boys we did the walk, finding the caches as we went.

Now THAT is a proper geocache! 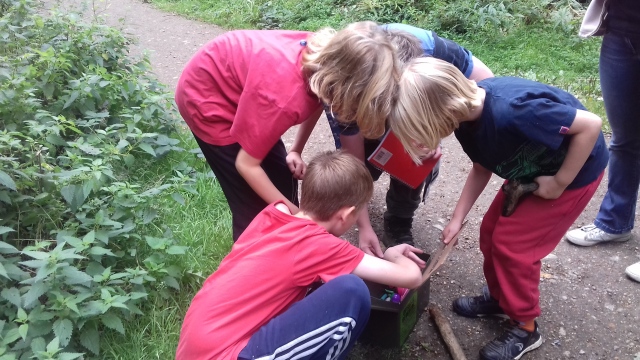 What wonders lay within?

That left only one part of the badge criteria left to complete; to place a new geocache. Conveniently about this time a couple of local caches in the park were archived as the owner was no longer prepared to maintain them anymore which left us a couple of handy gaps on the maps to fill.

So, at the beginning of October it was back over to Cassiobury Park to search for some good hiding spots. We spent quite a while trying to find appropriate places, this particular park has a surprisingly large number of trees that seem to disappear straight into the ground with no emerging root structures which are so popular with the geocaching community. Eventually we managed to find a couple of spots and the boys chose their containers, filled them with log sheets and swag and then recorded the coordinates using their smartphones. We then spent a little time collecting some numbers from a few nearby landmarks as one of the caches was going to be a multi and then it was back home to write up the cache listings.

Sam chose to be CO on the traditional, as he already was the owner of a multi; a church micro in Aldenham, and this went through fine going live just a couple of days after being submitted. The multi, which Ben and Ethan put themselves down as CO on took a little longer as the reviewer queried a couple of points but in the end it was also published You can check out the caches using the below links.

Predictably the multi gets less finds than the traditional and tends to confuse some people, for no other reason than it is a multi, but both caches are still in place and still being found, the trad having been found 34 times in its first 6 months. Not bad considering it went live as winter was starting to creep upon us.

With all the practical work done, the boys completed a summary report of all the activities they had done towards the badge and along with a few pictures submitted these to the Scout leader. Just a few weeks later and the boys were in possession of their Scouts geocaching badges. I am very proud of all the effort and hard work they put in and, I have to say, that the whole process was a lot of fun for all involved. 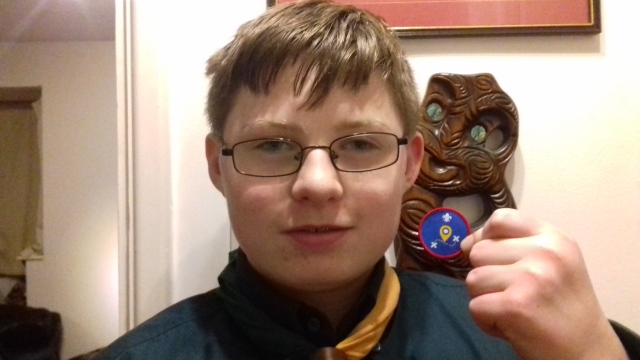 As the cherry on top of the cake recently the scouts did geocaching as an activity on one of their regular evenings and not only were the boys super well prepared and able to help others in the troop, but they chose to go to the park and find the two caches that the boys had created. Happy days, and don’t forget… Be Prepared!