The plan today was to head over to Mill Hill to tackle a small series of caches in a circular walk around the Mote Mount open space. Legend has it that a long time ago a landlady of a pub was either murdered or murdered someone or some such other thing and, you guessed, her ghost is said to return every year to the area on or around 21st June. The series takes her name and so does the name of the road where the walk starts. Nan Clarke’s Lane is a short dead end road that runs off of Highwood Hill and is the site of some pretty fancy homes to say the least. We tried not to lower house prices too much and parked discreetly at the end of the road. The series consisted of 6 Traditional caches and a bonus cache which can only be found by assembling a puzzle made up of pieces stored in each of the 6 caches. The sun was beating down hot and strong today and we went prepared with lots of water and a good layer of sun cream. With a back of supplies and notes and iPhone in hand, Sharlene, Sam and I set off.

The beginning of the walk takes you from the end of Nan Clarke’s Lane onto a public footpath which is also the entrance road to Mote End Farm which has owned and controlled the land around here for a good couple of hundred years. The Farm’s history is a rich and varied one which we read on a handy sign that was located near the entrance but I have forgotten most of it now. It did involve the Conservative MP for Harrow owning it in around 1900 and there was a really interesting bit about Peter Rogers from the Carry On Films but I can’t quite remember that either. 🙂 If you want the facts then try this link http://www.moteendfarm.co.uk/our-team/farm-history/ 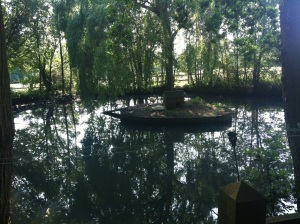 Anyway, even before we got to the farm the description in the cache notes said something about passing a pond which is home to some rather odd swans. Looked like a swan honked like a goose and on our arrival they promptly honked as if on cue for around 2 minutes before getting bored and realising that we were not interesting at all. There was a brief discussion as to whether they were real or not, the consensus between Sharlene and the blind man being that they were.

Meanwhile back at the ranch I hear you cry, weren’t you going geocaching today? Quite right, but first here is a nice picture of Sharlene and some horses. 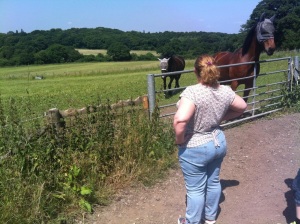 On through the farm and down the side of some fields the iPhone took us and as the metres counted down we found ourselves in a little covering of plants and trees that took us out of the sun for a bit and searching for cache number one. When we found it, it was one of those great moments when you discover something that you know hardly anybody ever sees anymore.

Hidden inside the undergrowth and completely overgrown was a gate and old sign post indicating that this was the footpath to Stirling Corner. Amazing that this sign post has now been totally absorbed by the treeline now and you would never know it was there even if you were walking on the footpath a mere two metres away. We logged the cache and remembered to record the shape colour and markings on the game piece as instructed because we were going to need these for later to solve the bonus cache.

Number two took us further along the side of Barnet gate wood in the direction of Barnet Road and it was a relatively easy find at the base of a huge Oak tree. A nice surprise inside the cache was another first for us – a Geocoin.

A Geocoin is a small custom made coin that has a unique tracking number on it and is bought by geocachers and then placed into caches and allowed to travel around from place to place. Because each coin has a unique number it means they are trackable. This one started off life in the Czech Republic in June 2010 and since then has done over 3000 miles. We’ll drop it off somewhere along the way and do our bit for moving it on.

The third cache took us very close to Barnet Road and into a little enclosed clump of trees. You remember fighting your way through a bit of branches and bushes when you were a kid and finding yourself in an almost den like enclosure that made you feel as if you had found a secret hideout for a bunch of smugglers or something. Well this was something like that and it was me that found the cache this time. So that is 2 to Sam so far and one to me and Sharlene is left straggling behind… not that we were counting… much.

The route to cache 4 was the least enjoyable bit of the walk as it involved breaking out of the fields and woods and walking for a short way up hill along the busy Barnet Road. It was hot, noisy and we were well overdue for a break by now. We crossed by the Gate pub and headed down Hendon Wood Lane in search of a “somewhat obscured” entrance to a footpath… which we missed and had to backtrack. 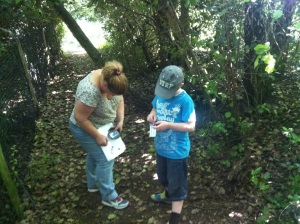 Once we had found it, it took us back off the road and into the shady covering of the trees running along the back of the houses on Hendon Wood Lane. Cache number 4 was another relatively easy find and Sharlene finally got her name on the scoreboard. Sam took a bit of a tumble here after an old rotten tree branch disintegrated under him and sent him face first into the dirt. No major harm done and we logged the find and recorded the puzzle piece and moved on.

The walk to number 5 was accompanied by an impressive bout of drumming coming from the garden of one of the nearby houses and soon we had the cache in our hands thanks to Sam this time. Only one more to find and then could we figure out the puzzle to lead us to the bonus.

Shortly after leaving cache 5 we broke out from the cover of the trees and the sun again shone down strong on us. Thankfully it wasn’t too far to the next GZ and once there we busied ourselves searching. The site was a pond and eventually I found it at the base of a fence post, but not before a lot of rather prickly searching elsewhere. I acquired my only sting of the day here and it still tingles now.

So with all caches found and the puzzle pieces recorded we headed to the coordinates for the bonus cache, which according to the description where coordinates to a handy bench to enable us to sit and piece together the puzzle to discover the actual coordinates of the cache. We opted not to sit on the bench but instead took a shady shelter around the corner and after some needed fruit and Haribo sugar injection, Sam and Sharlene went to work with scissors and glue fitting the pieces together. Whilst they were doing that I mused on the remarkable placing of a bench seemingly in the middle of a field and remember reading in the description that it was courtesy of National Car Parks that it was there at all. This seemed a little odd to say the least because, as I said, it was a long way from the nearest road let alone a car park. Interestingly Ronald Hobson one of the co-founders of NCP lives in Mill Hill and this would probably explain the bench. This mystery solved and after taking some pictures and gazing at my navel for a bit the creative arts and crafts group had come up trumps and glued all the pieces in the right place and revealed the key to solving the puzzle. 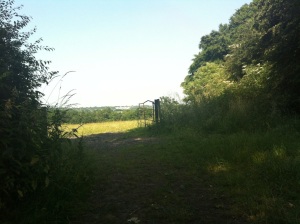 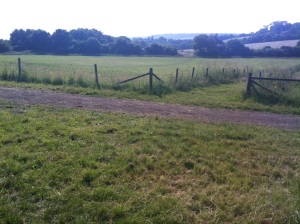 We excitedly dialled in the coordinates to the iPhone and I passed it to Sam to tell us how far we would have to walk to find the prize. “11 metres was his reply! So for the last half an hour we had practically been sitting on top of it… classic. A few short moments later and Sharlene had notched her 2nd find for the day and we were victorious having found all 6 caches and the bonus. Photos taken, log signed and a few trinkets swapped and we were on our way back to the car. 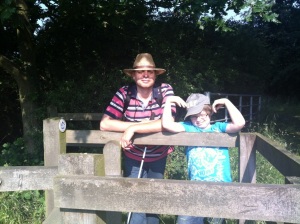 ————-
All in all, despite the heat and the occasionally face meeting dirt incident, and nettle sting it was an excellent day out and one that sparked more than a few memories for me having grown up in the area and not least of all having delivered news papers to Mote End Farm and one other house on Nan Clarke’s Lane when I was in my early teens.

This entry was posted in Uncategorized. Bookmark the permalink.