As mentioned in a previous entry, there was a plan to go geocaching twice during the week of my birthday. The first time it was just Shar and I and you can read about that at Shocking pre-birthday caching in Hyde Heath. Our second outing was two days later when Sam joined us to tackle a relatively new series called North Mymms Circle.

We have already cached in the Brookman’s Park / North Mymms area a couple of times this year and this return visit gave us the opportunity to try and locate a cache that we had failed to find on a previous outing. In addition to this we noticed a couple of other caches that were near to the North Mymms Circle, so added these in too. We decided that these extras were located a bit further away than we wanted to walk…I Know, I know, don’t look at me like that…, so our plan was to do a couple of stops in the car on the way to the main series.

Our first was at a coal post and as we arrived at GZ, I was surprised to discover that we had been here before. On our previous outing to tackle the PB Stroll, we had tacked on an earth cache and as part of that we had been at this very spot to collect some information about flood defences. I was astonished that I hadn’t spotted this coal post on the map when planning the earth cache. Some OCD alarm bells rang in my head at how freaked out I was that I had missed this when planning. The actual find was made quickly and then we took a short walk, crossing over the busy A1M road, to get to our other odd cache of the day.

Au Revoir Jacob (GC61754) was hidden recently for a very specific and rather unusual reason. The Jacob mentioned in the title refers to Jacob’s Moving Cache #1 (GCA87C). Au Revoir Jacob is a tribute to the last known resting place of the moving cache which we were lucky enough to find back in 2014 (see The Cache With Ants in its Pants). The manner in which it disappeared is quite a long and controversial story which I will attempt to summarise briefly – don’t roll your eyes, I know brevity is not my best skill but I am doing my best *pout*.
For many years Jacob’s moving cache happily travelled around the UK even though its owner was in Utah in the states. Some people didn’t like the way the cache often got passed from hand to hand or hidden specifically for others to find without making the coordinates public as per the rules. Eventually the CO decided that he wanted to relaunch the cache and so disabled it for a period and then put out a new container in the states and updated the coordinates of the cache to be in Utah, stranding the old container in the UK. This ticked a lot of people off, especially those in England who had been following it around trying, unsuccessfully, to get their hands on it. The last person to have it in the UK created this new cache as a tribute to the last hiding place of Jacob before it was hijacked back to America. Lots of discussions and arguments followed in the cache logs and on forums until finally it was flagged up to Groundspeak who identified that the CO had breached the guidelines and they decided to archive it altogether. It is a shame that it was archived as you can no longer create new moving caches; I expect that this will be the only one of its type we ever log.

Au Revoir Jacob was a nice easy find in a treeline not far from the A1 and I awarded an FP for the memory of Jacob and also because the container was a really cool metal tin in the shape of a slice of cake… who doesn’t love cake?

After this it was back to the car and a short drive to try and vanquish our previous DNF, 15 BP Stroll (GC5X3D8). There are different types of DNFs, a subject that I plan to blog about soon, and this one could be described as follows. We had previously searched for a long time at GZ and eventually gave up but with no obvious idea where the cache should have been but also no reason to suggest that it was missing. Then over the course of the next couple of months I watched with growing irritation and frustration as every cacher after us managed to find the cache with almost no problem at all. It was with a sense of determination tinged with an undercurrent of desperation that we returned to the GZ to try and prove ourselves worthy of the mantle of geocachers.

After ten minutes of searching, Sam and I on one side of the quiet country lane and Shar on the other, all we had to show for our efforts was a whole lot of nothing and the rather surprising discovery of a wild chicken clucking around in the bushes. I was starting to feel a foreboding sense of failure when Shar crossed over to our side and commenced searching all those places that Sam and I had just searched. Obviously this was a waste of time seeing that Sam and I had already searched these places and it was with no small amount of irony and inevitability that Shar plucked the cache from its prickly hiding place after just a few moments. *sigh* I tried to be annoyed but instead felt a wave of relief and joy that we had actually found the cache and I could once again wear my “I use billion dollar Satellites to find tupperware in the woods” badge without feeling like a fraud.

Now that the “Add-ons” had been dealt with we drove over to a nearby church to take on the 10 caches in the North Mymms Circle. As we arrived the bell ringers were just leaving and once they had departed we got down to collecting the information we needed for the second cache in the series which was a multi. The first had just been disabled, suspected missing, so the church proved to be a good starting and ending place for us. With the numbers collected and crunched we set off along a quiet lane to pick up the final.

The series is a straightforward enough circular walk along footpaths and the caches all pretty much standard and easy hides so I won’t be detailing them all . The walk was surprisingly muggly though causing us to have to loiter with intent on a number of occasions waiting for dog walkers or other unhelpful members of the public to pass. I think the worse occurrence of this was at around number 6 where there was a whole family sitting on the grass to the side of the path no more than 20 feet from the pole we needed to search. Shar and I acted as a human shield while Sam retrieved the cache and with a well-practised air of nonchalance we signed and replaced the cache and headed off to the next one in the series. The trick is to just act like what you are doing is the most normal thing in the world ever and to not even give the muggles a second glance. 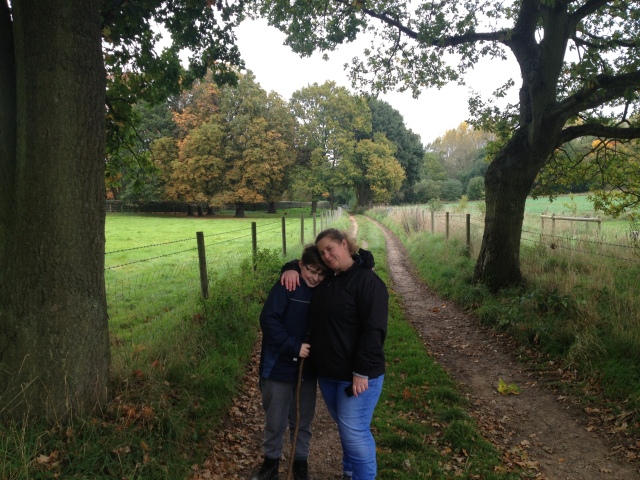 Always time for a quick Picture

Our toughest search was at the next cache where the GZ consisted of a massive oak tree covered in ivy with winding, protruding roots and bushes all around where our target turned out to be a tiny Beer bottle cap pushed into the ground with a nano tube on the end of it. This one took us quite a while and even though it was me that finally managed to find it, purely by touch, in amongst the roots of the tree, I felt a small sense of frustration at what a waste of a decent hiding place this was… you could have quite easily hidden a regular container there… but I spose that was the irony of it all..*harrumph*.

The rest of the series was found without too much problem and aside from it being a little noisy at times as we walked next to the busy A1, it was generally an enjoyable walk. Unfortunately number 10 in the series ended up being a DNF for us even though we all searched for about 20 minutes. Seeing as we would be returning to pick up number 1 when it is re-enabled, having 2 instead of 1 to collect when we came back was not so bad. A slightly nervy but thankfully uneventful walk through a field that was meant to contain a bull but didn’t, and we were back at the car supping a welcome cup of hot chocolate.

An enjoyable few hours out and the nice feeling of putting to bed a previous DNF, even though we then racked up another one. Happy Days.

This geocaching adventure took place on October 17th 2015 and took our total cache count to 1328.